Flying Iceland Air to London as our base, we had the opportunity to enjoy a layover in Iceland. Iceland Air offers layovers of 1 – 5 days without an extra charge, a great way to explore Reykjavik!

We opted for the one day layover and had 28 hours in Iceland. It was just enough time to decide that we will definitely be back. Weather changes quickly in Iceland – when we landed, the wind was so bad that the airplane wasn’t able to actually make it to the airport and we had to exit the airplane via stairs and take a bus to the actual airport.  Although it was February, we had sleet, rain and wind but no snow.

The Blue Lagoon: We bought tickets two months ahead of time which was a good move as it sells out frequently. You are dropped off about an eighth mile from the actual lagoon entrance and walk a path through the lava rocks. Once there, you are provided a wrist band, which you can charge things to (drinks, spa, food, snacks, towels and access to your private locker.) Little is 7 so he was allowed to enter the women’s changing room with us; which was fine because there are private lockers and private shower areas.

After changing, storing all belongings and showering, you enter the lagoon. It’s amazing – the water is really warm, blue-white and glowing with black lava rocks surrounding the lagoon. The lagoon is huge, with different pools to explore, a bar where you can buy smoothies (little picked blueberry-skyr, a type of yogurt), a facial bar where you can get a free mud mask, bridges and a waterfall that feels almost like a jacuzzi. The water was never deeper than 4’ or so. All children 8 and under are required to wear floaties on their arms. We were there for sunset and at night the pool was lit up. We swam around for around 2 hours – little loved every minute of it, exploring the different pools and putting the mud on.  We certainly could have spent much longer there but we were late arriving and were eager to get to the hotel and sleep.

Some tips when visiting the lagoon: Wear a swim cap. The water does crazy things to hair. Little’s hair can stand up on it’s own right now and feels like it has a ton of product in it. Bring a towel to avoid the $7 towel rental fee. 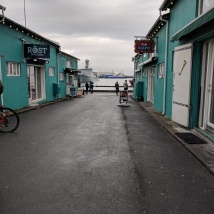 We were exhausted and feeling very relaxed after our trip to the lagoon. We took the bus to our hotel in the middle of Reykjavik, which was lively even though it was 11 PM. The buses aren’t very clear or communicative, so we had missed our stop and had to catch a different bus. The hotel (Centerplaza Hotel) was in the middle of old town and had a cute square right in front; which luckily had a toasted sandwich (“boat”) joint right in front of it that stayed open for the young folks. They were super sweet with our tired selves and made sure we had plenty of food before we settled in our room; which was surprisingly comfortable, big, clean and perfect.

The next morning after the best, most comprehensive hotel breakfast we had encountered on this trip (complete with cod oil shots on the buffet), we went down to the harbor to check out the Viking Museum, SAGA. It’s an hour journey through 700 years of Viking history, including our family favorite Floki! There are displays (some creepily animatronic) to help you visual the history – sometimes the exhibits were a little violent, but we have read lots about history, the good and the bad, so it wasn’t something that we were worried about with little. The great thing is that SAGA actually keeps pictures at the entry of all of the questionable content so you can view it before paying entry and decide if it’s okay for your kids.

Reykjavik is a great place for kids. Another thing on the list was the Whale Museum, which came highly recommended, but we were worried about catching the bus with all of the challenges we had the day before. We had also hoped to attend Elf School, but it wasn’t in session during the time we were there. Instead, we decided to support the local economy. Little picked out a Thor’s Hammer amulet, a book on Viking mythology and my sister and I shopped for Iceland wool scarves and blankets. After shopping in the quaint downtown, we caught our 7 hour flight back to Seattle – bluebird skies and flying back in time, as we landed 10 minutes before our take off time in Reykjavik.